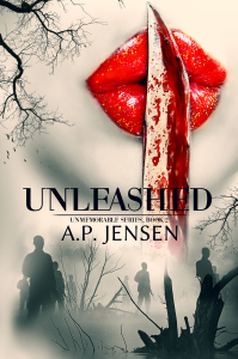 This is the third paranormal romance by A.P. Jensen I've read and I've yet to be disappointed.

Unleashed is the second book in the Unmemorable series (Unmemorable is the title of the first). If you enjoy paranormal romances with a lot of action, it is a series well worth reading. Raven learns in the first book that she is an Unmemorable, a race of special humans that people can't remember as soon as they turn away ​from them. Being unmemorable is only one of their special traits; among other things, they are telepathic and have super-hero fighting abilities.

Two other groups of special humans, the Council and the Battalion, are arch enemies, and they both want the Unmemorables on their side. Cain, the grandson of the Council's leader, is sent in the first book to protect Raven. She's used to taking care of herself and wants nothing to do with this strange world that she's been thrust into. However, Cain is another story. In the first book, their tempestuous love affair begins. It continues into Unleashed, as does the conflict involving these three groups of special people.

The action between the Unmemorables, the Battalion, and the Council will keep your blood pumping—and if that doesn’t, the action in bed between Raven and Cain will! I was caught up in the story from the first page and it didn’t let me go until the last one. No, that’s not quite right—it still hasn’t let me go! Hurry, please, Ms. Jensen, and give us the next book in the saga!
​​INTERVIEW WITH THE AUTHOR
BACK TO A.P. JENSEN
Powered by